A Revolution Of the Mind

The Industrial Enlightenment put knowledge in the service of production, changing the course of history.

In the coming days and weeks, the Hamptons, the Vineyard and all the other August escapes from workaday life will likely see a bull market in pessimism as financiers and powerbrokers reach into their summer book bags to relive the recession or look ahead to even greater disaster. "Lofty geo- globaloney tomes on the future of the world" is how the economist Nouriel Roubini has described his summer reading list. Alan Greenspan has said that he will delve into "Lords of Finance: The Bankers Who Broke the World," which sounds more like a penance than poolside pleasure.

Which is why summer demands some more hopeful fare and why a last-minute claim for room in any escape should be allowed for Joel Mokyr's "The Enlightened Economy." A former editor in chief of the Oxford Encyclopedia of Economic History, Mr. Mokyr sets out to answer what, on the face of it, is an old question: Why did Britain have an industrial revolution first? Why not France or the Netherlands, given their economic power in the 17th century and, at the time, the increasingly free market in ideas between Paris, Amsterdam, Edinburgh and London?

Mr. Mokyr's answer—articulated in densely packed but gratifyingly lucid prose—is that in Britain ideas interacted vigorously with business interests in "a positive feedback loop that created the greatest sea change in economic history since the advent of culture."

Reduced to a thumbnail sketch, liberty and natural philosophy—a catch-all term for the study of "useful" knowledge— begat prosperity, which begat more liberty and useful knowledge, which in turn spread through Europe and the Americas.

Mr. Mokyr is well aware that marrying economics to intellectual history has little appeal for many economists who, he says, share a decidedly ironic affinity with Marx for some variant of historical materialism. Economic events are thus explained by the economic decisions that realize profit. But as historical explanation, this is thin gruel.

It ignores changing cultural values and the power of persuasion, not least by dint of appealing to reason. What Mr. Mokyr calls the "Industrial Enlightenment"—to distinguish it from the specifics of the French Enlightenment—was animated, he argues, by a belief "that material progress and economic growth could be achieved through increasing human knowledge of natural phenomena and making this knowledge accessible to those who could make use of it in production."

The goal was betterment, prosperity, personal happiness—the constellation of intellectual goods that came to dethrone salvation as the reason for human existence. Practical problems acquired a philosophical urgency, and where once innovation was "an efflorescence rather than a continuous process," nature came to be seen as something that could be controlled and exploited through inductive and experimental methods. 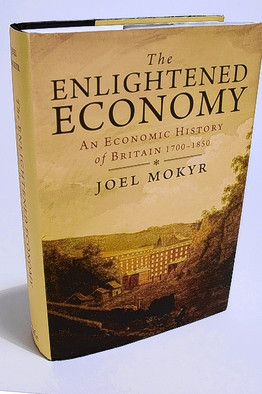 But the power of knowledge would not, by itself, have given Britain its formidable economic edge; the Continent, too, had an array of scientific genius as brilliant as any in Scotland and England. (Think only of the French chemist Antoine Lavoisier.) The reason for Britain's exceptionalism, Mr. Mokyr says, lies in the increasing hostility to rent-seeking—the use of political power to redistribute rather than create wealth—among the country's most important intellectuals in the second half of the 18th century. Indeed, a host of liberal ideas, in the classic sense, took hold: the rejection of mercantilism's closed markets, the weakening of guilds and the expansion of internal free trade, and robust physical and intellectual property rights all put Britain far ahead of France, where violent revolution was needed to disrupt the privileges of the old regime.

Such political upheaval in Europe, notes Mr. Mokyr, disrupted trade, fostered uncertainty, and may well have created all kinds of knock-on social disincentives for technological and scientific innovation and collaboration with business. Much as we might deplore too many of our brightest students going into law rather than chemistry or engineering, it is not unreasonable to think that many of France's brightest thinkers were diverted by brute events into political rather than scientific activism (or chastened by poor Lavoisier's beheading during the Revolution).

Thus Montesquieu may have advocated free trade as passionately as Adam Smith, but Smith's "Wealth of Nations"—the canonical text of the Industrial Enlightenment—fell upon a society primed to judge and implement it as an operating system. Evangelical and liberal alike shared in the vision of "frugal" government, as Mr. Mokyr puts it. In the opening decades of the 19th century, Parliament took an ax to itself, pruning the books of what were now seen as harmfully restrictive laws.

It is impossible to do justice to the subtlety and detail of "The Enlightened Economy"; it is the product of a lifetime of research and thought, and stands as a landmark work of history; but more to the point, its perceptive examination of the birth of economic prosperity holds many arresting insights for our fraught economic times, where freedom is increasingly associated with government regulation and politicians appear all too-willing to accommodate new varieties of rent seeking.

It is also refreshing, and possibly redemptive, to be reminded of a time when scientists composed poetry—as Charles Darwin's polymathic grandfather, Erasmus, did praise of steel—and when the idea that agronomy and geology and metallurgy were as vital and as exciting as any of the arts.

Mr. Butterworth is the editor of STATS.org and a columnist for Forbes.com.

This copy is for your personal, non-commercial use only. Distribution and use of this material are governed by our Subscriber Agreement and by copyright law. For non-personal use or to order multiple copies, please contact Dow Jones Reprints at 1-800-843-0008 or visit

Good background information for the period.