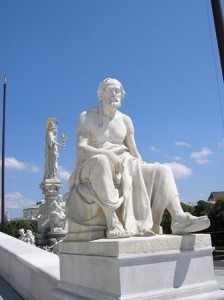 After observing the administrative practices in the realm of Muhammad Ali, the Ottoman pasha of Egypt in the early 19th century, William Edward Lane, the great Arabic lexicographer, commented:

Most of the governors of provinces and districts carry their oppression far beyond the limits to which they are authorized to proceed by the Básha [Muhammad Ali]; and even the sheikh of a village, in executing the commands of his superiors, abuses his lawful power. Bribes and the ties of relationship and marriage influence him and them, and by lessening the oppression of some, who are more able to bear it, greatly increase that of others. But the office of a sheikh of a village is far from being a sinecure. At the period when the taxes are demanded of him, he frequently receives a more severe bastinadoing than any of his inferiors; for when the population of a village does not yield the sum required, their sheikh is often beaten for their default. .  .  . All the fellaheen [peasants] are proud of the stripes they receive for withholding their contributions. .  .  . Ammianus Marcellinus gives precisely the same character to the Egyptians of his time.

The Egypt of Gamal Abdel Nasser, Anwar El-Sadat, and Hosni Mubarak made traditional “Oriental despotism” vastly more modern and merciless. Lane’s accounts of Muhammad Ali—Egypt’s first great modernizer, not known for his kindness—and his senior officials occasionally casting a vengeful eye on excessively corrupt officials and showing mercy to their victims seem quaint today given the cruel, predatory habits of President Mubarak, his family and friends, and his security men. With the exception of Syria, where the religiously heretical (Shiite) Alawite ruling family of Bashar al-Assad oversees a ferocious police state, Mubarak’s Egypt is the most advanced dictatorship in the Arab world. A Stasi-like array of spies spans the country, but discreetly and gently watches resident foreign businessmen, the Westernized Egyptian elite, and the American University of Cairo, a once-vibrant institution founded in 1919 by Presbyterians, now intellectually withered, where Egyptian and Western academics have exercised extraordinary caution in imparting disruptive ideas or criticism of the ruling family. Mubarak and his friends discovered that an Egypt at peace with Israel could attract billions in U.S. aid, regardless of the regime’s human rights record, and billions more from tourism, whose profitability continued even when Mubarak’s police state crushed the liberal dissident and presidential candidate Ayman Nour in 2005. Only the country’s religious extremism when it turned lethally against Western tourists made a dent.

But the modern Egyptian fellaheen—the urban poor, the semi-educated youths from the country’s awful state universities, and a good slice of Egypt’s not insignificant middle class—have finally had enough. As is now well known thanks to the massive demonstrations in Tahrir Square, the country is a land of stark extremes. In Cairo, multimillion-dollar riverine apartments and lushly watered exurban golf courses built on sand look out upon an endless horizon of low-rise, nearly windowless brick apartment buildings, which are virtually uninhabitable during Egypt’s summer. These “homes” are stuffed with people who can see progress. (Cairo is a vibrant mess of a modern city.) Egypt’s acid-tongued poor can read. Sixty years of socialist-turned-capitalist dictatorship have given the Egyptian masses sufficient education to dream; it’s given the bright among the poor and the country’s growing middle class the means to aspire. Like much of the Middle East without oil, Egypt has been growing economically (around 6 percent per annum for the last five years). Using the standard set by Harvard’s late Samuel Huntington, Egypt economically is beyond the democratic “transition zone,” where a society’s complexities start to overload centralized authoritarian states and the common man’s dreams become tangible.

An upbeat analysis from someone who knows Egypt.

The High Court yesterday ordered district officials in Shariatpur to explain why they failed to protect 14-year-old rape victim Hena from being whipped to death as per a fatwa on Monday.

The deputy commissioner, the superintendent of police of Shariatpur and the thana nirbahi officer of Naria upazila -- where the incident took place--will have to report to the HC in 15 days how it happened although the court (HC) had eight months ago declared fatwa illegal and a punishable offence.

In a suo moto rule, the HC directed them also to report what steps they have taken in this regard.

The reports said Hena was raped by her 40-year-old relative Mahbub on Sunday. Next day, a fatwa was announced at a village arbitration that she must be given 100 lashes. She fell unconscious after nearly 80 lashes.

Fatally injured Hena was rushed to Naria health complex where she succumbed to her injuries.

Meanwhile, another HC bench yesterday directed the law enforcement agencies to submit a report to it within three weeks on what steps have been taken following this incident in the light of its judgement on extra-judicial punishment.

The bench headed by Justice Syed Mahmud Hossain on July 8 last year delivered the verdict declaring illegal all kinds of extra-judicial punishment including those in the name of fatwa at local arbitrations.

It also observed that infliction of brutal punishment including caning, whipping and beating at local salish [arbitration] by persons devoid of judicial authority constitutes violation of the constitutional rights.

It demanded punitive action against those who enforced fatwa concerning her.

The ASK called upon the government to take effective steps to stop recurrence of such incidents.

Never Smile at a Crocodile

Lebanese Forces leader Samir Geagea argues that if Hezbollah takes over Lebanon it will become another Gaza, at war with Israel and isolated from the Arab and Western worlds. That takeover is being openly practiced by black-shirted Hezbullah groups who gathered in groups of 30 at strategic points of entry into the city, including points near the capitol. Hezbollah spokesmen denied the gatherings had any significance.

END_OF_DOCUMENT_TOKEN_TO_BE_REPLACED

Is there something wrong with our priorities?